Although it can be tempting to try to get close to our marine neighbors, it’s always best to view them from a safe and respectful distance for their safety — and yours.

Keep in mind that seals and sea lions often spend their time out of the water to rest, molt, or nurse their pups. Close encounters with people can be harmful and continued disturbances may cause stress, including causing mothers to abandon their pups.

Please do not attempt to swim with, pet, touch, or elicit a reaction from the animals. You’re too close if an animal starts to stare, fidget, or flee into the water. Even if you don't see these reactions, the National Marine Fisheries Service recommends that you keep yourself and your pets at least 50 yards away (1/2 a football field). Keep your dog on a leash around seals or sea lions to prevent bites to the dog and the seals or sea lions.

Please never attempt to feed a seal or sea lion — it’s harmful and illegal under federal law. Why? Feeding alters the behavior of wild marine mammals, and may condition them to approach people and vessels for food, instead of foraging for their normal prey. Seals and sea lions can become sick if they eat food that is not part of their normal diet. They may also begin taking bait and catch from fishing gear, risking injury or death by entanglement in or ingestion of the gear.

With these guidelines in mind, we encourage you to come and view these magnificent animals in person (safely and respectfully). See you soon!

In 2011 a 20-foot vessel named Kamome was swept out to sea from its home port in Rikuzentakata, and eventually washed ashore at Crescent City's South Beach two years later. The vessel became unmoored during the tsunami that devastated Rikuzentakata and much of Japan. The tsunami followed the most powerful earthquake ever recorded in Japan at magnitude 9.1, which tragically resulted in the deaths of over 20,000 people and completely destroyed over 121,778 buildings.(https://en.wikipedia.org/wiki/2011_T%C5%8Dhoku_earthquake_and_tsunami)

Students of Del Norte High School researched the history of the Kamome vessel and discovered it belonged to the Takata High School in Rikuzentakata, Japan. The students then cleaned the vessel and reached out to Rikuzentakata to return it home to Takata High School. That was the start of a relationship between the two schools. They have since engaged in a student exchange program supported by the TOMODACHI Initiative and became sister schools in 2017. The connection has developed so much that Crescent City/Del Norte County and Rikuzentakata have now formally established a sister city relationship.

This week's Japanese delegation visit is part of a cultural exchange funded by a $150,000 grant from the U.S. Embassy. The visit includes workshops for women leaders in business, healthcare and government. Japanese students will also be visiting Del Norte High School to foster their student exchange program.

The sister-city relationship will be featured in a television profile on NBC Sports during the 2020 Olympics (to be held in Tokyo, Japan from July 24th to August 9, 2020). The Crescent City Harbor District is participating in a publicity campaign to promote local tourism and economic development, which is being coordinated by Cindy Vosburg, Executive Director of the Crescent City-Del Norte Chamber of Commerce, and Rob Holmlund of Eureka-based Malex Consulting. 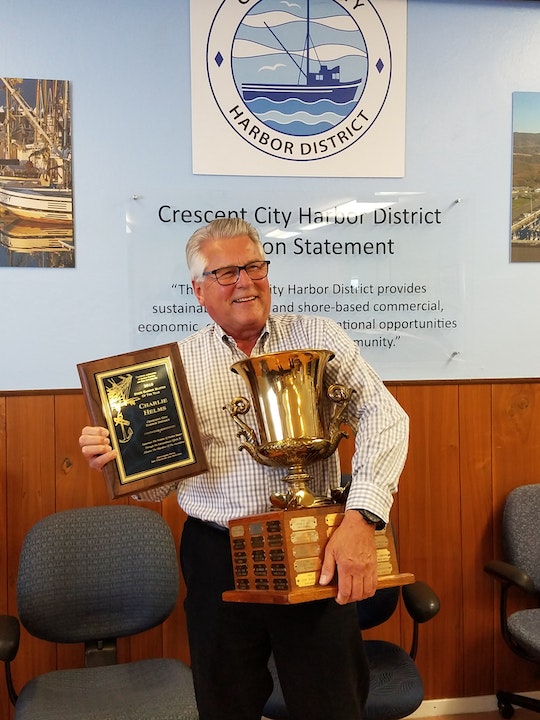 Come learn about the 25 year solar power contract that the Crescent City Harbor District has entered into with American Diversified Energy.

Thank you to some traveling friends who posted an article of their experiences in Crescent City and the Harbor.

The boats are out and the crabs are coming in. It has been busy mornings at the Harbor – with trucks lined up waiting to load crab.